This a piece I wrote for a flash fiction challenge.  I wrote it in memory of a friend who did not die in Vietnam.  He died because of Vietnam.

His eyes were full of the things he had seen.  His mouth, full of stories better passed over than passed down.  Memories caught in his craw and woke him sweating cold in the dread of his nights and left him staring into his darkness til Dawn’s early light. 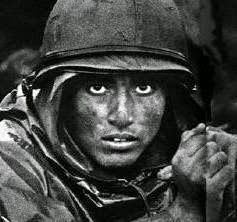 Well meaning people wearing blue scrubs and white coats did what they could.  As it was with so many others, it did not work out.  Scarred and broken he was sent back to a homeland that would never be the same.  His innocence pooled bloody on too many foreign plains.  Feeling forgotten, discarded and alone with his demons, he sought solace in barbiturates, whiskey and gin.  He could never forget his role in the pre-meditated chaos of Man killing Man in faraway lands.

Image courtesy of this site
Posted by MRMacrum at 9:48 AM

MRMacrum
Married and finally used to the empty nest syndrome. I endeavor to put one foot in front of the other without tripping. I just recently sold my bike shop in a nearby town and am free to .................

Lost in the BoZone

This work is licensed under a Creative Commons Attribution 3.0 United States License.